Is aerial firefighting worth the risk and cost? 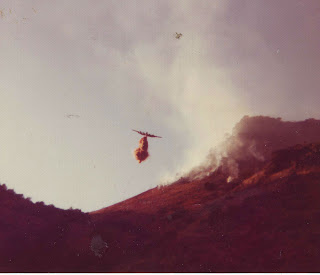 I just read an article questioning the effects of aerial attacks on fires and whether or not they work. That concern is nothing new. Dropping slurry on fires has often been the target of public officials disputing the cost, danger and effectiveness of this form of firefighting.

Slurry is composed of mainly water and fertilizer: water to cool down flames, and fertilizer to encourage regrowth. The problem is slurry alone does not put the fire out. By the time the liquid filters through tree canopies, all you get is a fine mist with minimal coverage. Actually, the intent is to cool down the flames enough that ground crews can move in closer and build line, a cleared area to prevent the fire from advancing. Is it worth the expense? Many say it is not. However, what is interesting is that even though it is not all that effective, every year thousands of gallons of the pink mixture are dropped on wildland fires all over the Country.

So why do fire officials continue to pour millions of dollars into aerial firefighting? Turns out it’s more for the news media and the public outcry than anything else.

Take your average forest fire. News reporters are not allowed to be any closer than fire camp, and sometimes not even that close. This means no spectacular photos to plaster on the TV or newspapers. Add a dramatic slurry drop, however, and bingo! You’ve got some pretty dramatic shots that sell papers and glue people to their televisions.

The other interesting phenomenon is that the general public doesn’t feel like a fire is being fought aggressively enough if they can’t see any obvious action. Aerial firefighting provides a sense of security to people, that something is being done to protect their homes, businesses and forest.

Aerial firefighting is extremely dangerous not only to ground crews below, but to the brave pilots that fly in hazardous conditions. Steep terrain, unpredictable wind shifts and fire generated weather, all make this type of firefighting one of the most dangerous kinds of flying a pilot could face.

Will aerial slurry drops end in the near future? It’s hard to say. What’s scary is that it might take a disastrous loss of life before changes take place. The deaths of the Granite Mountain 19 shook Forest Service policies to the core, and not only is the effectiveness of the fire shelter being revisited, but so is training and procedures previously thought to be adequate.

The take-away here, at least for folks worried that government agencies aren’t fighting fires aggressively enough, is that just because you don’t see planes dropping slurry, it doesn’t mean nothing is being done.

Email ThisBlogThis!Share to TwitterShare to FacebookShare to Pinterest
Labels: Firefighting