Women firsts: Engineer for the construction of the Brooklyn Bridge 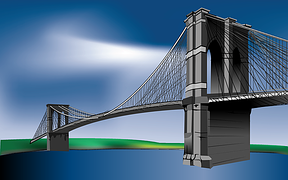 The Brooklyn Bridge is considered a historical monumental engineering project unlike anything built before. This bridge, spanning across the East River from New York to Brooklyn, was designed by John Roebling in 1869. Roebling’s daughter-in-law, Emily Warren Roebling, became in involved when her husband, Washington, took over after his father passed away.

Emily Roebling didn’t want to be a passive assistant. While most women would have balked at engineering studies, Emily dove into unlikely topics such as mathematics, material strengths, stress analysis and cable construction. Little did she know how valuable those classes would be. Just a few years later her husband became seriously ill, leaving him nearly paralyzed. The bridge construction fell on Emily.

Mrs. Roebling stepped right in. So perfectly, that many thought she was the Chief Engineer. Seems to me she was, even though the title was never officially bestowed upon her.

While becoming an engineer had not been part of Emily Roebling’s life plan, she became one, overseeing the completion of one of the finest examples of engineering for its time.