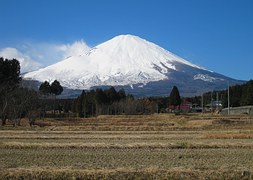 It’s interesting to note that years ago, even if a woman wanted to climb Mt. Fuji, she was forbidden to do so. It wasn’t until the Meji Era ended in 1912 that the rule ended. This Era brought about a more accepting and modern culture, permitting women to participate in activities that were considered “for men only.” Despite the rule, however, one woman made it to the top in 1867, but details are sketchy. Lady Fanny Parkes is officially recorded as completing the trek.

As one legend goes, Mt. Fuji was thought to have a woman deep inside the mountain. Should she become jealous, she would erupt. This is why it is thought no Japanese woman climbed Mt. Fuji, even if she could. It took a brave Ms. Parkes to prove that no eruptions would take place if a woman set foot upon the mountain. After she did, other women soon followed suit.
Email ThisBlogThis!Share to TwitterShare to FacebookShare to Pinterest
Labels: "Women Firsts"