Is aerial firefighting worth the expense and environmental damage? 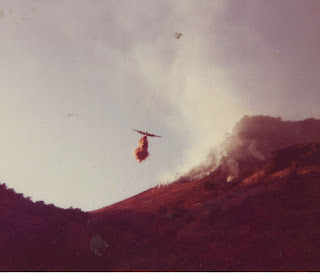 That's the question on the minds of Forest Service fire management officials during a record breaking fire season. Cost is a big factor, with firefighting budgets for the year long since spent.

You've probably seen dramatic shots of planes dropping fire retardant, or slurry, on wildfires. While it may look like they are dousing the flames, they are not. Slurry is a fire retardant, only meant to slow and cool flames so fire crews on the ground can get closer and build fireline. Without someone on the ground, slurry is worthless.

There are many cases where slurry is ineffective, too, such as steep, inaccessible terrain and on windy days, when it just blows away. Often, by the time the decision is made to send slurry to fire, it's too late. Slurry will do nothing to stop a raging, fast moving conflagration.

Although slurry is basically a mixture of water and fertilizer (for plant regeneration down the road), it is detrimental to fish once it gets into streams and rivers. This is another cost to consider.

It's ironic that despite all of this, the public demands more aerial attacks, believing the Forest Service should be doing everything possible to contain fires. This is the same problem with the "Let it Burn" policy. It's hard to get people to understand that sometimes fire is good, and just because they don't see planes dropping slurry on a fire, it doesn't mean there's a problem.

No comments:
Email ThisBlogThis!Share to TwitterShare to FacebookShare to Pinterest
Labels: Firefighting

The summer of 2015 is now considered #4 in the amount of acres burned in the past 40 years. With all of the new technology, why are fires still plaguing our forests and ranges? Simply put, because we've been putting them out for so long. True, experts blame climate changes and drought, but fire is a natural occurring cleansing Mother Nature has used in the past to keep fires from becoming major conflagrations.

Fire has an important role in forest and rangeland ecology. Without fire, some plants can't generate new seedlings. Southern California's chaparral needs fire to thrive. The answer doesn't lie in better technology, or more firefighters, or pouring more money into fighting fire. What we should be doing is prioritizing thinning practices to reduce dense undergrowth encouraged by fire suppression, and discouraging the urban/wildland interface where homes are built dangerously close to primed-to-burn areas. The "Let it Burn" policy is not new, but often ignored because the minute the public sees their forests ablaze, they want them out. Now. Fire is good, and if the fire is not threatening homes or total devastation (after all, some forest is better than no forest), then the fire should be allowed to burn under careful surveillance. This is not an easy task, but it's obvious we aren't winning the fire wars by fighting them.
No comments:
Email ThisBlogThis!Share to TwitterShare to FacebookShare to Pinterest
Labels: Firefighting

For anyone fascinated with firefighting, Young Men and Fire by the author of A River Runs Through It, is a must-read. MacLean's account of how and why 13 Forest Service Smokejumpers met their fate on the Mann Gulch Fire, August 5th, 1949, will have you turning page after page with his captivating narrative of the days leading up to the fire, the fateful day, and subsequent events.

The crew boss didn't think the Mann Gulch Fire was a big deal. Easy. They'd take their time, have it out in time for dinner.  Instead, over a dozen firefighters were burned alive or so severely injured, they later died. So what went wrong? MacLean wanted to know. He spent 14 years of his life finding out everything he could about that fire, and why so many lives were lost. He interviewed survivors, poured through Forest Service documentation, and talked to fire experts, to piece together the tragedy.

I found this book both fascinating, and emotionally taxing. Reading how these men lost their lives is chilling, and not for the weak. You will never think about death by fire in the same way again.

Reading about the bravery and sacrifice of others reminds me how much I loved my work not only because of the prestige, excitement and gratification, but because it fulfilled me in a way no other job ever has. My life had purpose.

No comments:
Email ThisBlogThis!Share to TwitterShare to FacebookShare to Pinterest
Labels: Book reviews

Firefighters risking their lives to get the perfect shot?

During my firefighter years, I carried a camera, but I have very few photos. What few I have weren't even taken by me, because somehow it didn't seem right to stop work to take one. Plus, I was too darned busy building line to think about such things.

With just about everyone carrying a cell phone these days, it's no wonder that firefighters are taking them on the fireline. It also comes as no surprise many inexperienced crewmembers stop to take a photo. This sounds just plain crazy to me. And apparently, I'm not alone.

The Forest Service is considering banning cell phones on the line. I agree this is a good idea. They're supposed to be working, not taking photos for  friends. Next thing you know they'll be calling friends and family to tell them what's going on.

As for the argument photos can be used for documentation and training purposes, let pros do that. Fire crews engaged in active firefighting should not be taking away from the job at hand.
No comments:
Email ThisBlogThis!Share to TwitterShare to FacebookShare to Pinterest
Labels: Firefighting
Newer Posts Older Posts Home
Subscribe to: Posts (Atom)