Women firsts: The first woman to sail solo around the world 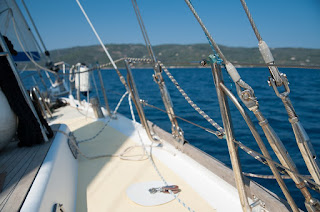 Based on Naomi James’ past, you wouldn’t think she would have made a good candidate for sailing around the world. First off, she was born in New Zealand, on a sheep farm, miles from the ocean. Second, she didn’t get around to learning how to swim until she was 23. Uncertain about what to do with her life, she went to hairdresser school. She found that boring, and decided to sail to Europe. On the ship, she got incredibly seasick—another good reason not to take up sailing.

When in Europe, she met her husband-to-be, who just so happened to own a yacht. In love with the man, she soon fell in love with sailing, too. He taught her everything about sailing, and while he was off in a race, she decided to sail around the world, alone, and without stopping. Was this a smart move with only six weeks sailing experience? Apparently, the logic didn’t cross her mind. Her husband, Rob, agreed to support her in this quest.

On September 9, 1977, Naomi set out on her dream trip with a loaner boat (the Express Crusader) and supplies purchased with sponsorship money. Naomi relied solely on old-fashioned technology for navigation: a sextant and chronometer for figuring out latitude and longitude. It didn’t help that she wasn’t very good at this; she often got the two confused.

Because Ms. James was sailing some of the most treacherous waters known, it’s no surprise she ran into some massive storms. One capsized her boat during the night, and she woke up on the ceiling. Lucky for her, the boat righted itself with minimal damage. Nothing short of a miracle.

Naomi’s dream of sailing nonstop came to an end after that terrifying ordeal.  A minor disappointment, really, considering she’d already traveled 8000 miles without radio contact. The remainder of her trip was rather uneventful.

Settling in Ireland with her husband, Naomi was pregnant with her daughter when tragedy struck her new family. Her husband drowned in a yachting accident. It wasn’t his death that stopped her from ever sailing again she says; she just lost her interest in the sea.
Email ThisBlogThis!Share to TwitterShare to FacebookShare to Pinterest
Labels: "Women Firsts"