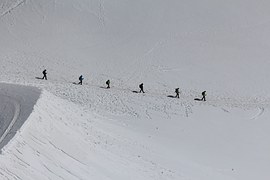 For Junko Tabei, climbing Mt. Everest wasn’t to prove a point, and certainly not to prove she was better than a man for having done so—she just had a passion for climbing. Born in Japan in 1939, she has climbed many mountains, starting after graduation from college in 1962. Mt. Everest, (at over 29,000 feet), was on her “to-do” list. In 1975, she did.

Mrs. Tabei’s accomplishment came at a time when women in Japan were exerting their rights to be more than “tea servers”—which, incidentally, happened even if they worked in an office. One thing for sure, Junko had little support with her planning, along with 14 other women, to make this climb. Many men admonished her for not staying home and raising babies. Japan was decades behind in women’s rights, making Junko’s tenacity that much more admirable.

After a harrowing and yet enthralling experience on that fateful May climb, in 1969 Junko formed a woman’s club called the “Ladies Climbing Club: Japan (LCC)”. In addition, she is grateful she made that climb prior to it becoming a status symbol and contest to see who could hike it faster, younger and even standing buck-naked on the top.

Additionally, her passion for Everest extended into concerns for the degradation of the environment. Trash, urine (enough to fill over 3000 bathtubs) polluting the water for villages down below, and even (this is particularly disconcerting), the bodies of those who die on the climb, still threatens a formerly remote area.

Besides her campaign to return Mt. Everest to its pristine state, Mrs. Tabei is also focusing on hiking every major peak in every country. She’s doing pretty darned good, too. So far, she’s at 60 peaks and still going strong. Oh, and did I mention she is 72 years old?