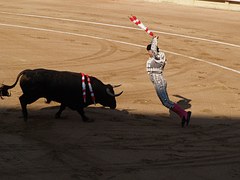 Patricia McCormick was so good at bullfighting, an elite Mexican bullfighter once said that had she been a man, she probably would have been a top bullfighter of her time. She wasn’t the first woman to fight bulls, there is no record of who was the very first, but she was the first American woman to do so in Mexico.

Ms. McCormick was only seven years old when she saw her first bullfight and became fascinated with the sport. She took lessons from a retired matador, debuting in 1951 in Juárez. It wasn’t an easy fight: the bull trampled and tossed her around before she killed him.

It’s interesting to note that while many male matadors complimented her on her bravery and talent, none were willing to sponsor her so she could become a full-fledged matador, not just an apprentice fighter. But that didn’t stop thousands of fans from attending her fights, where she refused to fight bulls on horseback. She wanted to stand before them at their level.

Ms. McCormick suffered a number of goring injuries, including a horn into her stomach and a life-threatening wound to her leg. The stomach injury was so severe, the doctor was ready to give up on her and give last rites, but she survived.

Patricia continued to fight bulls until 1962, where she retired in California to a sedentary life of artistry and secretarial work. Life didn’t treat her all that well, and she continually had money troubles. Ms. McCormick never married, and never had any children. She died at the age of 83 in a nursing home.

While bullfighting has never been of interest to me (I’ve always thought it was cruel), the fact that Ms. McCormick pursued something she wanted to do despite the odds, is what is important in this overview of her life.