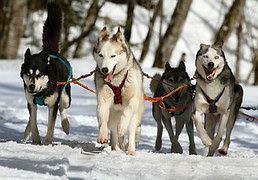 Most people have heard of the Iditarod race. They probably know it’s a grueling trek for hardy mushers and their dogs. It’s been named the “Last Great Race on Earth”. It also was a race strictly for men, until Libby Riddles came along in 1985.

A little bit about the race: it is 1100 miles long, and traverses some pretty rough country. Mushers endure rugged mountains, ice covered rivers, thick, nearly impenetrable forests and tundra miles from civilization. Not to mention below zero temperatures and windchill enough to freeze skin solid. Why would someone want to make such a journey? It all started in the early 1900’s as an important mail route from Seward all the way to Nome, with a number of stops along the way. After dropping off the mail, mushers brought back gold. There’s much history that needs to be remembered along that trail. When Joe Redington organized this race, his goal was to preserve the legacy of the sled dog and what it has meant to Alaskan culture.

Libby Riddles came to Alaska with her boyfriend when she was only sixteen years old. They lived the homesteading kind of life, and somehow she found she had the knack to train sled dogs for locals. Then she thought to train them for her own sled, and entered the 1980 and 1981 Iditarod races. She drew much attention as the only woman, and unfortunately, for not doing well in the races. This meant no one would sponsor her. No sponsors meant no money. Life was tough on Ms. Riddles. She hunted for food, sold fur hats to feed her dogs. She had no running water or electricity.

In 1985, Ms. Riddles decided to try again. And boy, did things ever go wrong. After her sled broke, her team ran off. Her dogs got sick. Two weeks into the race, a massive blizzard hit, and the competitors had to stop and wait it out. When the storm cleared, she had a choice to quit, or keep pushing. She chose to keep going. Another blizzard hit. She still kept going. Even with temperatures at 50 below zero and a 40 mph headwind, Libby pulled ahead of everyone else. Eighteen days, 20 minutes and 17 seconds after she started, Libby Riddles crossed the finish line as the first woman to win the Iditarod.
Email ThisBlogThis!Share to TwitterShare to FacebookShare to Pinterest
Labels: "Women Firsts"