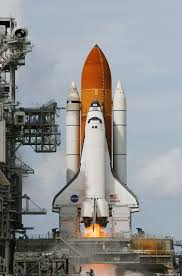 Valentina Tereshkova beat Sally Ride into space by twenty years. Ms. Tereshkova fell in love with skydiving at the age of 22, attracting the attention of the Soviet space program, who wanted not only to beat the United States into space, but beat them into space with a woman onboard. In June of 1963, Soviet Cosmonaut Tereshkova made 48 orbits over a time period of 71 hours, longer than all U.S. astronauts spent in space combined, up until then. Where her sky diving expertise came into play was with the tricky 20,000 foot capsule ejection required during reentry. How’s that for nerves of steel? After her amazing feat, she never flew again.

Where was the United States during all of this? The U.S. did consider allowing women into the space program in the late 1950s and early 1960s, but decided to keep the program all male until Sally Ride joined twenty years later.
Email ThisBlogThis!Share to TwitterShare to FacebookShare to Pinterest
Labels: "Women Firsts"