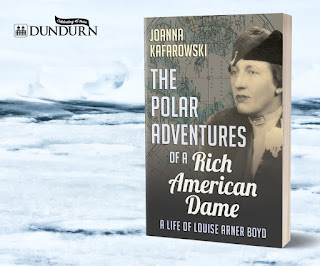 I am pleased to have Joanna Kafarowski on my blog today, talking about what inspired her to write her biography: The Polar Adventures of a Rich American Dame: A Life of Louise Arner Boyd. Welcome, Joanna!

I’ve had a passion for the Arctic for as long as I can remember. But life took me down several different paths- publishing, working for women’s organizations and freelance writing before I did anything about it. Entering my PhD program in my forties, I focused on gender and natural resource management in the North and spent happy times working with Inuit women in Arctic Quebec. As an avid reader, I sought books about women and exploration and soon encountered the name “Louise Arner Boyd.” 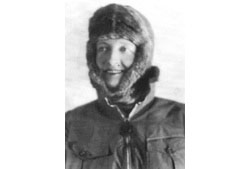 I was immediately intrigued. Initial research revealed that she was a wealthy California socialite and philanthropist who lead an mysterious double life. Louise Arner Boyd (1887-1972) was active in community affairs in the San Francisco area but she was also known on the international stage as an intrepid explorer who, between 1926-1955 lead seven hazardous expeditions by sea far above the Arctic Circle. She was showered with awards and honours from several countries and was highly regarded by her peers. Yet, less than fifty years after her death, her extraordinary life and scientific accomplishments have been largely forgotten.

I wanted to know more but found, to my dismay, that no comprehensive biography had ever been written about this formidable woman. For the past ten years, tracing the life of Louise Arner Boyd has been my joy and my obsession. I have tracked her movements across Scandinavia and North America. I’ve stood on the tip of Bonavista Peninsula in Newfoundland gazing out to sea where her beloved ship the Veslekari was sunk; swept out the Boyd family crypt at the Mount Tamalpais Cemetery in California and stayed in the same Norwegian hotels she frequented before she left on her expeditions. I’ve acquired a small library of treasured books that were from her own library as well as one of her suitcases and even a lingerie bag with her initials. It has been a labour of love! Even now, on the eve of the publication of my biography, “The Polar Adventures of a Rich American Dame A Life of Louise Arner Boyd,” I still find her a fascinating individual! 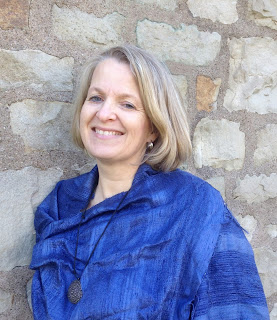 Joanna has a PhD in Natural Resources and Environmental Studies, a Master's degree in Geography, a Bachelors degree in English and a Professional Specialization Certificate in Heritage Conservation Planning. Joanna was a university lecturer and consultant for many years. Her edited volume, “Gender, Culture and Northern Fisheries’” was published in 2009 by the University of Alberta.  Joanna participated in a Last Degree North Pole Expedition which gave her a unique insight into the inner life of her biographical subject. She is a Fellow of the Royal Society of Geographers, a Member of the Society of Woman Geographers and an Affiliate Member of the American Geographical Society.


Joanna's book will be published by Dundurn Press in Canada on November 4th and in the United States on November 28th. You can pre-order on Amazon:

You can connect with Joanna here: